Jay Long, born with a name to be his destiny, runs long and strong!

Frigid weather has set upon us in the northeast causing the usual mayhem of winter.

Burst pipes, no heat, slick roadways, no room to put all the snow, and in general an overall crimp in our routines.

Personally I have been known to use the weather as an excuse not to be exercising regularly. I'm probably not alone. 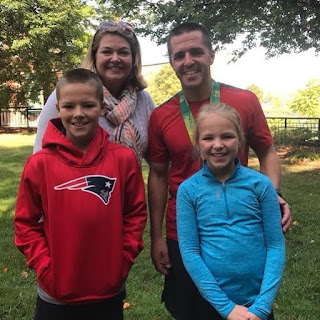 This guy is a machine, and no weather is stopping him.

Yesterday morning it was hovering close to zero, which of itself is no major deal, but the winds were HOWLING! And if you are an outside jogger, you know that as the vehicles whiz past you, there is an additional blast of air, plus the stinky exhaust.

Yesterday morning, in these conditions, with sand, ice and snow on the roads, Jay Long was pounding the pavement. He is a machine.

This is a hometown hero. Nice guy, nice family, works and volunteers in the community, and runs and runs, usually to help a cause.

The photo used is from Gerardi Insurance Services' facebook page.

Jay is one of the Gerardi Team, and this shot is after Jay ran the Baystate Marathon last October. Soon after he ran the New York City Marathon, where he ran on behalf of the Meb Foundation (Charitable Foundation of US Olympic Marathoner Meb Keflezighi).

If you see Jay out running, or any other determined soul, slow down, drive carefully and give them a friendly toot or shout out the window!

Cheers for the good guys!

Posted by Putnamania, Marcy's Choice at 8:46 AM

Putnamania, Marcy's Choice
Putnam, CT, United States
I believe: The woods would be very quiet if only those with the best voices sang. Don't try to be good tomorrow, be a little better every day. Aspire to do the things that you think you cannot do!